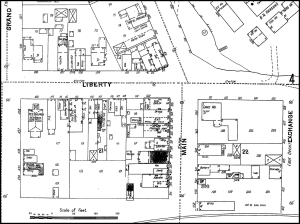 Accompanying the Yesteryear column this week is a “partial” view of a map of the business section of Vermilion (i.e. Liberty, Main, and Grand streets) from the year 1904. While it is hardly as legible as one might prefer, it is nonetheless informative.

Last July (VPJ 07/27/17) I wrote about the many changes that occurred in pretty much this same part of town since the 1950s, noting much to my chagrin that they’re still happening. Paul Hartenstein’s barbershop was, at the time, the only vestige of the Vermilion I knew as a youngster, and unbeknownst to me, it too was about to disappear. But whether anyone likes it or not that’s just the way of it. The aforementioned map certainly serves to underline that reality.

For nearly a decade now I’ve been transcribing bits and pieces of news from Vermilion’s former weekly newspaper, The Vermilion News, beginning in 1897. I do one issue a week and I’m currently transcribing from the September 1909 issues. As I’ve worked I often come across names with which I am familiar; but I am often at a loss to know locations – the sites of homes and businesses way back when. Consequently, I have come to deem old maps of the town as priceless resources. I can tell you, for instance, where all the “big” things were, like the M.E. Church and the Lake House Hotel, but about the sites of smaller places such as saloons, drugstores, meat markets and barbershops I have only been able to speculate – until now.

This particular map is like a window into the history of our town. One can see, for instance, that in a building on the east side of Grand Street several doors behind the M.E. Church that there was a print shop and a “milly” / milliner shop. The print shop was the one my grandparent’s purchased in 1901 from George Whitmore. It was moved to a new building to the south, just across the tracks, the same year this map was made. The Tailor shop next to it was that of John Ritter the father of Vermilion philanthropist George Ritter.

It may interest some to note that there were four saloons in this part of town: three on Liberty and one on Main Street – not to mention one in the Lake House Hotel on the southwest corner of Liberty and Main. In 1904 the building where Big Ed’s Soda Grill is currently located was split into two shops, and the west side of the building housed Wagner’s saloon. Next (west) of it was the first Erie County Bank. Working west down the block away from the bank was the little shop that was used as the Mayor’s office, Jake Abell’s barbershop, and the old George Rathbun grocery that had been recently vacated by A.D. Baumhart. Baumhart had moved his shop to that location after a fire destroyed his store in 1903.

The post office was located on the south side of Liberty next (east) of the M.E. Church in a building that some years later housed a popular restaurant. Going east from there along Liberty was another tailor shop, George Wahl’s sewing machine store, a rather large fraternal lodge room, another saloon, a restaurant, Krapp’s meat market, a cigar store, a sausage factory, John Klaar’s Harness shop, a boot and shoe store, another saloon, an empty lot and finally the Pelton-McGraw General Store on the corner. The Pelton-McGraw aka Nuhn-Trinter store was torn down in 1922 to make way for today’s Full Building.

Moving south from the corner of Liberty and Main was another split store that housed Nuhn’s Drug store on one side and a boot shop on the other. When local pharmacist Albert Hart started in business he was in the Nuhn store location. Next to Nuhn’s was another drugstore where A.D. Baumhart relocated after leaving the Liberty street location. Upstairs over all the buildings on this corner was the Masonic Hall. Next to these stores was another millinery shop, and another barber. Between those shops and jewelry store was an empty lot where Mr. Baumhart eventually built his new store. The last building on the block was a hardware store that shared the room with another grocery store.

Just across the street was a business that many folks wish still existed; the Schwensen Bakery; just north of it was another saloon; and next to it the Lake House Hotel. Across the street was an empty space that would someday become Exchange Park. Below the park along the river were the B.N. Parsons and Buckeye Fish houses.

Even though this is a “partial” map of one part of the town there is a good deal of detail that I’d like, but am unable, to mention here. One, among many other things that surprised me was the horse shed the map indicates that once sat in an area just south of the Wagner Hotel (now home to Dr. Suszko’s office and the Vermilion Photojournal). But it makes sense – a parking garage for business patrons.

Considering the fact that in 1904 Vermilion was but a village with a population of 1200 people the number of business concerns would seem to indicate a very strong economy. The principle industries in town at the time were fishing and tourism. Boat building had long since moved to larger ports. And though lumber was still being processed and shipped from the port it was on the decline. Change was in the wind. Before two years had passed a local contractor named John Gegenheimer was busy building a factory building just south of the Nickel Plate tracks on Water Street / West River Road. It was being built for a Cleveland inventor named F.W. Wakefield. And the map was about to change – again.