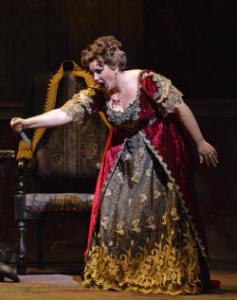 Jennifer Rowley, a 1998 graduate of Vermilion High School, has gone on to entertain the world, but still holds a strong appreciation for the attention and opportunities she received while in Vermilion. Rowley is now an international opera singer with credits at the Metropolitan Opera, the Royal Opera House Covent Garden, the Semper Oper Dresden, the Norwegian National Opera, and many others.

While just a teenager, Jennifer Rowley and her family moved to Wakeman from Brunswick. Despite living outside the district, her mom felt Vermilion was the best place to nurture her daughter’s young talent, so she met with school administrators and made arrangements for her daughter to attend Vermilion High School her junior and senior year.

While at Vermilion High School, Rowley participated in school musicals, show choir, Soundsations, and choir. She performed in both Hello Dolly and Fiddler on the Roof. She also participated in Speech and Debate competing in the dual acting categories, which along with participating in the school plays and musicals allowed her to strengthen her acting skills as well.

Rowley stated that Ted Williams, her music teacher at VHS, was instrumental in setting her on the path to a successful career in music. She shared that Williams heard something different in her voice and took her to Oberlin College to arrange private lessons. Williams also provided her with many opportunities for solos and big choir master works. She reflectively shared that he was fantastic and really took the time to work with her.

After leaving Vermilion, Rowley went to Baldwin Wallace College Conservatory of Music where she received a Bachelor of Music, and then on to Indiana University’s Jacobs School of Music where she earned a Master of Music. In 2003, at the age of 23, she actually left grad school for a month to make her professional debut as first lady in the Cleveland Opera’s rendition of Mozart’s the Magic Flute.

She is currently preparing to perform Tolska in upstate New York and then in Nashville and finally at the Metropolitan Opera. When asked, she shared that they work out contracts one to two years in advance, so even though she isn’t allowed to make public announcements until the opera company makes their upcoming seasons known, she knows what she is doing for at least a year out.

She did also state that sometimes there is less notice. For example, this past spring she performed as Rozane in Alfano’s Cyrano de Bergerac with the Metropolitan Opera. She was actually the understudy for that position, but the first singer was injured a week before rehearsals were scheduled to start, so she had to step into the role. She was able to step in on such short notice because as the understudy, she had been preparing for the role and already knew the part.

Rowley explained that preparing for a performance takes months. For example, in August she will start working with her coaches and instructors to learn her role for a performance she will be in next season. She will work independently from August until February when rehearsals start. She stated that she is expected to already know and be able to perform all of her parts when she arrives at rehearsal.

Studying independently includes both musical and language preparation. Rowley speaks fluent Italian and knows some German. However, she is trained to pronounce all languages using the phonetic alphabet. Her coaches work with her on inflection and style to ensure she is expressing the words with the right emotion and emphasis. She shared that it is common to sing and perform in languages she doesn’t actually speak.

Reflecting back to her time in Vermilion, she shared that she auditioned for the Baldwin Wallace College Conservatory of Music by performing a song in Czechoslovakian. Not knowing the language, she studied a book on the language and how to pronounce the letters, so that she could sing.

Earlier this month, Rowley came back to Baldwin Wallace to perform and was delighted to see people from Vermilion attended the concert to see her. Rowley stated that Vermilion is a fantastic place for students to explore their artistic side, and she is very happy her mother made it possible for her to attend high school here.