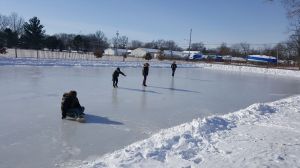 At the Tuesday, September 18, Parks and Recreation Board meeting, there were several improvements discussed for Vermilion parks. While relatively small, these improvements would provide big benefits to residents using these parks.

Resident Katie Lalonde addressed the board regarding a proposal for a new playground for Sherod Park. She first went to the board two months ago with the idea and was back to get permission to move forward with getting plans and looking into funding. She has worked with members of the board as well as others to determine the appropriate size and location for the playground. Her proposal is to replace the existing playground structure with a new one in the same spot.

Terry Parker state that he has met with Lalonde and Dana Corogin at the park, but there is no point in moving forward if the board does not approve the idea. Lalonde stated that by placing the new playground were the current one is, there would be no need to cut down trees or move exercise equipment.

The question was raised as to whether the new playground would be inclusive. Lalonde stated that she thought that would be phenomenal, but she is concerned about the size saying that inclusive playgrounds she has seen are much larger and likely wouldn’t fit in the space being taken up by the current playground. There was some discussion between the board, Lalonde, and city councilman Brian Holmes on the options or an inclusive playground or inclusive features. Lalonde stated that she wanted the playground to be appropriate for ages 2 to 12, and she would investigate inclusive options when doing more research on the project.

Parker reminded the board that there were still many details to work out and factors to research and that all they needed to vote on was whether Lalonde could move forward researching the proposal and looking into possible funding.

Corogin asked Lalonde if she was only interested in pursuing this for Sherod Park. Lalonde responded that there are many activities at Sherod, and there are always people there using the park. “My heart is at Sherod Park” After more discussion about manufacturers for playground equipment, the condition of the current playground equipment, and the playground foundation; the board voted unanimously to allow Lalonde to move forward with research and potential funding for the project.

Corogin shared that thanks to volunteer efforts, the Skate Spot remodeling project came in under budget. She stated that they have approximately $1000 left over from a grant, and the parks board had allotted $5000 for the project, which was mostly still available.

Dennis Brudney stated that at first, they contemplated using the money on another feature. However, they noticed at the park open house that many of the kids were sitting behind the halfpipe. When asked about it, they pointed out that there were no shaded areas at the Skate Spot to rest and cool off. He researched several options and found one that would be easy to put up and down and fit perfectly over the current stands. The quote for the structure was $5300 from a company out of Florida and included everything except the foundation. Corogin stated that the deadline to use the grant money and have everything turned in for reimbursement was November 30, so they needed to decide and move forward. The board voted to approve spending up to $2000 more to purchase and complete the creation of a shaded area at the Skate Spot.

Tim Costello addressed the board regarding the ice rink on Devon Drive stating that the ground is not level causing the east end of the rink to freeze before the west side is deep enough, which results in a great deal of maintenance on his part to make the ice rink usable. He wanted the board to consider regarding the rink to make it better and more usable. They obtained a quote to have the rink graded 12 -14 inches and the excess dirt hauled away for $2900. They also discussed putting the lights back up, which were taken down during the remodeling of the Skate Spot.

The idea of a warming structure was also brought up. This would be a small structure like a shed that would let ice rink visitors get out of the wind and warm up for a few minutes will skating. Corogin stated that there was a Vermilion business that sells sheds that said they would be willing to loan one to the parks department for the ice rink during the winter months. Everyone seemed to agree this would be a good addition to the ice rink, so Corogin stated she would get prices and the board knows about costs.