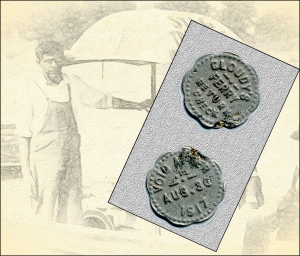 I am aware of the existence of only three tokens like the one pictured with this essay. The first was one owned by Vermilionite Irvin G. Howell (1906–1997) that was apparently misplaced during a local history celebration. A person walking along the beach near Linwood Park found the second token. Vermilionite John R. Moc recently discovered the third one (pictured), during one of his regular beachcombing expeditions along Vermilion’s lakefront. And if I told ye just how excited I was to be able to see this artifact from our town’s yesteryear I doubt that anyone would believe it.

In 1905-06 a fella named Louis Noel, a man of French-Canadian origins and his young wife Mary Kess-Noel from Erie, Pennsylvania arrived in Vermilion, Ohio. They had been married for nine years. She was 25. He was 33. Eventually Noel, a commercial fisherman by trade, obtained a lease to operate a small ferry concession on the east side of the Vermilion River transporting (mainly) Linwood residents to the west side of the river to do their shopping etc. in town. Though Linwood residents could also walk to town the trek was, for many years, rather circuitous. Taking the ferry was faster and most likely a good deal more fun – especially for youngsters.

Although the rights to the ferry service did not specifically belong to the Linwood Park Company the individual holding the lease (and there had been several) to the concession paid a special fee to the park to keep their west gate open allowing access and egress to the ferry. [Note: I have long thought, without a shred of any concrete evidence, that in the early days of the 19th century that this was the route / path early settlers and travelers took through, to and from the wilderness that became Vermilion Ohio.]

Anyway, Cloudy’s original ferryboat was a 20-foot flat-bottomed craft he named Gertrude. The following amusing anecdote about Cloudy was that of late Vermilion historian George Wakefield: “It was an open craft with benches on either side powered by a single engine near the stern. There was always a big pile of life preservers at the stern, and a large American flag flew aft. He steered her with a rope that ran athwart ship. When he docked he would shut the engine off in just the right place, coast into the dock, and gently toss a line around a pile to bring her to a slow stop. One of his favorite tricks was to start the engine by rocking the boat; he would set the flywheel near the ignition and roll the boat just right and the darn De Moy (engine) would just take off like a pet steam engine. He would then dance a jig as the boat moved in a small curve to the east dock singing as they went.”

The western dock was just south of the current waterworks building on Main Street. The fare was a nickel. Cloudy would later also use tokens (pictured) for this purpose. American and/or red flags were kept in pipes on either dock and when passengers wanted to cross they would wave them to get his attention. At night he used oil lamps on his docks, and later, when it became feasible, electric lights with switches were installed to signal for ferry service.

When the Gertrude had finally seen her best days local boat builders, Henry Goetz and Jim Brooks built a new round-bottom boat he christened the “Mary N.” They put the old engine in her, and Cloudy the ferryman was back in business. At least he was back in business until the days the automobile and better roads and walks made the ferrying trade obsolete.

Although it is true that Cloudy, the dark handsome clown in bib overalls, who habitually traded gibes with his pals manning the gill-netters; the guy who danced and sang whilst crisscrossing the placid waters of the Vermilion River, was viewed with some disdain by “proper folk”, his antics truly delighted most who knew him.

After the boat livery / ferry business (to poetically put it) dissolved he returned to commercial fishing. In late October of 1954, at the tender age of 83 years, he was felled by a heart attack and passed into the annals of local legend and history.

And then, irony of ironies: On August 30th 2018, precisely 101 years after it officially expired, this token appeared in a small baggy at the Vermilion History Museum. And I was simply amazed. Louis “Cloudy” Noel may be gone, but he is certainly not forgotten.

Vermilion resident Rich Tarrant is Curator of the Vermilion History Museum and a son and a grandson of the late proprietors of The Vermilion News (1897-1964). Readers may email him at: rnt@twc.com