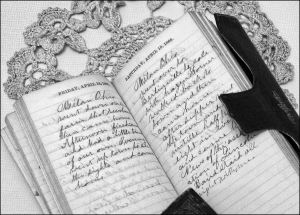 If I rant and rave (and I do) about the need for primary educators to continue to teach cursive writing to young people the photograph accompanying this essay is at least “one” of the reasons.

My great-grandfather, Caselton Roscoe, was born in Townsend, Huron County, Ohio in 1836. He came of age in North Milan where he and his 2nd wife Helen (Forster) lived until her death in 1906.  At that time he moved to Vermilion where he lived with his son, Pearl and daughter-in-law Bessie, who owned and operated the local weekly newspaper / print shop.

Caselton, like his father, was a farmer as well as a carpenter / millwright. In 1904 he worked on and supervised the building of a home and print shop for his children on the east side of Grand Street just a few door south of the Lake Shore & Michigan-Southern railroad tracks where he died in 1918.

Aside from his work as a carpenter he was also a musician. It was a skill that served him well throughout his life. When a young man he played his fiddle for many a dance in the Milan area. Joining the Army (Company K, 67th Regiment of the OVI) during the American Civil War – a war he referred to as the “Rebellion” – he was a “fifer” leading the troops from terrible destination to terrible destination. But don’t be misled. The life a Civil War musician wasn’t all treble clefs and drumsticks. During combat, they also worked as field medics and ambulance drivers, running onto contested battlefields and dragging the wounded off for medical treatment. And so it is no real surprised that in June of 1864 he would write in one his many diaries, “Hoping this cruel War will soon be over, the sight of so much bloodshed and mangled bodies, makes me sick. I am sick of War.”  What is somewhat surprising is that his diaries, along with sundry letters, drawings, tintype and ambrotype photographs, as well as numerous other artifacts from his brief sojourn on our planet still exist for us to inspect.

Thus, when I rant and rave about the continued need for primary educators to continue to teach cursive to our children, I do so because it will give them the ability to engage in not just reading about historical matters and memorizing memorial dates and places in textbooks. It may very well afford them the rare opportunity to read and hopefully understand who their ancestors were, how they saw the world, and what they thought of it in their own words.

Speaking for myself I have on occasion been asked, for instance, to describe the social climate in places like Vermilion during the Vietnam War years. Having been very much a part of that history I can say with some certainty that they were less frantic than some films and history books might lead one to think. The point is that persons who have not lived during, or were too young to remember a certain era in our history are curious. Thus, at least to myself, my grandfather’s diaries are relevant.

One case in point is evidenced by the April 15, 1865 passage in my grandfather’s diary (pictured):  “Milan Ohio – went over to Berlinville to sale with hazen [sic] Horner – walked back to town and then came home. After supper went up to town staid [sic] untill [sic] half past eight in evening and came home. News of the assassination of Lincoln. Baird staid [sic] all night with me.”

For whatever reason, I expected a more emotional entry than the one I found. Although very little is said about the assassination it was obviously important enough to be mentioned, but it was hardly earth-shattering news. What I find more significant about the mention of it on this specific date, April 15, 1865, is the speed with which the information traveled from Washington D.C. to the diary of a farmer living just outside the little village of Milan in Ohio in 1865.

And just think – this was accomplished without Facebook, Twitter etc. Even now it’s actually a rather exciting entry for one to see 153 years after the fact. At least it is it for those of us who can read cursive handwriting.