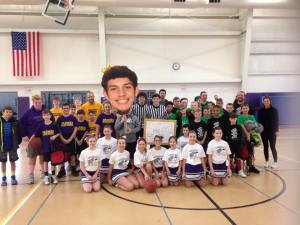 Vermilion High School senior Joby Pfeil recently made the record books by becoming only the fourth athlete in the district’s history to score 1000 points during his high school basketball career.  Pfeil stated that at the start of the season, he was sure he would make it to 1000 points, but he was still surprised when it happened. He went on to say he knew he was close, but wasn’t counting points. When he made his 1000 points and everyone started cheering, he said he thought they were cheering because they won the game. He didn’t realize until afterwards they were cheering for him.

Pfeil shared that he’s been playing basketball with his dad and brother since he was a little kid. He joined the city rec team as soon as he was old enough and then moved on to the school team as he got older. He went on to say that he has always enjoyed playing basketball. When asked if he planned to play at the college level, he shared that he wasn’t sure about that yet. His goal is to study architecture, and he said it’s difficult to find a university where he can play basketball and study architecture.

Pfeil’s love for the game has also led him to be a referee. Pfeil got his official’s license over the summer, which included classes, shadowing, and a test. He is now licensed to be a referee for fifth through ninth grade basketball games. He stated that he is refereeing games as often as he can, which has included the city rec program, Edison, and he is working on refereeing in South Amherst as well.

Reflecting on their winning season so far, Pfeil shared that he is really proud of the team because they have worked really hard to get where they are at. He did share that he’s disappointed he won’t be finishing the season with his brother Jonah, who is out due to a broken bone. He stated, “We’re really close and we’ve always played together. We have a connection, and I can trust him to always be in the right spot.” Despite his brother’s injury, he is still very focused on the team, and he hopes for a solid post-season run that will take them even further than previous seasons.