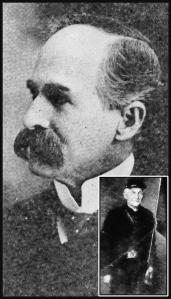 During the past several months I’ve been reviewing histories of Vermilion’s old Congregational Church that eventually evolved into the UCC Congregational church in our community. There are two: one written by Lucy Morgan (1855-1932) in 1918, the other by Elizabeth “Betty” Trinter (1917-2008) in 1993. These histories parallel the development of our community from pioneer times to the start of the 21st century. They are, in short, very interesting documents, full of interesting stories of the yesteryear and equally interesting people whose lives they document.

One of the people mentioned in both histories – one that caught my interest was a fella named John Albert Kaley. He ministered to the congregation here from 1895 to 1903. Among those persons who had served this church Kaley stood out because at one time he had the distinction of having served the longest pastorate in its history – eight and a half years. It is a record that was eventually eclipsed by two others: Rev. Earl English (1927-1956) and Rev. Louis Bertoni (1962-1996). Nonetheless, Rev. Kaley’s tenure seemed remarkable when one considers that the average stay of a Parson during the church’s then 75-year history was less than three years. So who was this guy? What made him different?

Rev. Kaley was the third of eleven children born to Charles and Elizabeth Kaley in Lewisburg Pennsylvania March 31st 1845. On March 28, 1863, three days before his eighteenth birthday, he enlisted in the Signal Corps of the Union Army during the War of the Rebellion (aka. the American Civil War). Most of his service time was spent at Washington D.C., New Orleans and Memphis Tennessee. He later noted that during those years he successfully made his way through “Ray’s Arithmetic”, saying that it was “a feat performed by perhaps no other soldier during the war”. [NOTE: Ray’s Arithmetic was published in 1834, just three years before McGuffey published his First Reader. It sold for six cents, and dealt in the main with mental drill. The problems required that the student think rapidly and accurately.]

In later years he would tell folks that while taking a three-month Signal Corps training course at Georgetown near Washington he “almost” shook then President Lincoln’s hand. Accompanied by a friend he went sightseeing at the White House and came across Lincoln on the grounds telling a story to a crippled man in a wheelchair. Being mere Army Privates they kept to the background trying to muster the courage to introduce themselves to the “Great Emancipator”. To his eternal regret their nerves failed them – they were so awed by the great man’s presence.

While he admitted seeing little action during the war, “my business being to wave flags by day and torches by night,” he did have some personal memories of Generals Grant, Sherman, Burnside and other Civil War heroes, as well as some famed persons from a later generation – namely William McKinley and famed Ohio Senator Mark Hanna.

Following the war he attended and graduated from Wittenberg College in 1872 and from Yale Theological Seminary in 1875. On April 7, 1885 he married Miss Carrie Hoyt at Hastings Michigan. The couple had three children by the time they arrived in Vermilion in 1895. During his ministry he served parishes from Vermont to Ohio. During his ministries he’d travelled extensively in Europe and Asia. While in the Holy Land he traveled more than a thousand miles on foot. And though he retired from active church work in 1911 he hardly stopped working.

In an interview published in the Honolulu Advertiser twenty years later [Note: Kaley obviously kept travelling.] the feisty veteran of both corporeal and spiritual battles slapped a table with his hand proclaiming that when some “reach seventy or seventy-five they conclude that they must take things easy, sit down and twiddle their thumbs.” Their children tell them “Now you mustn’t do this or that, Dad! You know you’re not as young as you used to be. That’s all wrong. I never worked so hard in my life as I did last year and I believe I have as much promise of twenty-five more years of life as I have had at any stage in my career.”

And that he nearly did. Well into his ninth decade of life, while living in Elyria, he was at it from seven in the morning till ten at night working on inventions in his workshop or writing one of his several books. He was also extremely active in the local chapter of the G.A.R. (Grand Army of the Republic) veteran’s organization. Until one year before his death he still marched in the Elyria Memorial Day Parade. He recalled that once on a visit to Gettysburg an Indiana woman asked him to mount the marble platform that had replaced the one where Lincoln spoke on November 19, 1863 and recite the Gettysburg Address for her. He had by that time earned some recognition for having delivered the address several times on Cleveland radio broadcasts.

At 11:40 p.m. December 13, 1938 the Rev. John Albert Kaley took leave of this world and went on to his final ministry. He was 93. And just as War Secretary Edwin M. Stanton, upon the death of Lincoln, is thought to have said, “Now he belongs to the ages,” so too does Rev. Kaley. There are others, however, who believe the phrase was “…belongs to the Angels”. In the case of Reverend Kaley, as well as President Lincoln, perhaps it is both.