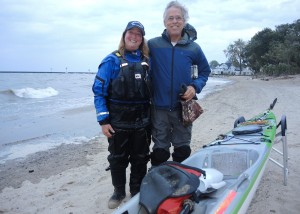 On Friday, October 27, Traci Lynn Martin landed her kayak at Main Street Beach despite the cold and windy conditions. As she got close to Vermilion, she was escorted in by the Vermilion police boat and was greeted at the beach by several community members, members of Main Street Vermilion, and mayor Bulan.

Vermilion is just one of many stops Martin is making on her journey to break the Guinness Book of World Records by kayaking all five of the Great Lakes in one year. That is a total journey of 5,800 miles. The actual record she is working to break is the farthest documented non-stop paddling trip by a Surf Ski in one year.

Martin is kayaking in a 19-foot long surf ski. This type of vessel is similar to a kayak except she sits atop instead of inside. This gives her virtually no protection from the wind and waves. The Surf Ski is longer than a typical kayak and has a deeper cockpit. Among experienced paddler, they are highly effective for paddling waves, which Martin has experienced a lot of on her journey.

The record to break was set by Gerhard Moolman of South Africa when he paddled 3,833 miles on a Surf Ski between Hout Bay, South Africa and Lamu, Kenya from April 20, 2002 to October 23, 2002. His trip was called The Far Blue and he used his trip to raise funds and awareness of AIDS among children in Africa.

Martin’s journey started on March 9, 2017 in Port Huron, Michigan, and it started with an ice storm that resulted in her having to be rescued off the ice. Despite her icy start, she has amazed many by continuing her journey in the face of many challenges including the weather, the unpredictable waves, being away from family, and suffering from rheumatoid arthritis.

Having rheumatoid arthritis means she is dealing with constant pain, as well as flare ups of extreme pain throughout her body. Having the arthritis has fueled her desire to pursue this accomplishment, and she has shared that she dedicating this journey to people who suffer from chronic illness.

The idea for this trip started brewing after caring for her mother, who was battling cancer. When her mom passes, she decided it was something she really wanted to do, and spent two years planning it. Much like when she landed in Vermilion, she has been greeted by people and communities all along the way. Since being in Vermilion, she has had the benefit of meeting and spending time with many Vermilion residents.

The distance she travels each day varies based on the weather and the condition of the water. However, her one-day record so far has been 50 miles in one day. Having completed lakes Michigan, Superior, and Huron, the three largest of the Great Lakes, Martin has already broken a record, but the final goal is still to complete what she has started.

Unfortunately, due to the windy weather and high waves, as of the paper deadline, Martin is still in Vermilion. She attempted to paddle on Sunday morning, but couldn’t because of the weather. As everyone knows, the wind and waves Monday and Tuesday were not much better.

While she has been a welcomed guest, the hope is that the weather settles down soon, so she can be on her way. You can follow the rest of Martin’s trip by going to her website, www.justaroundthepointe.com, or follow her on Twitter at @StellerTourD4ce or Instagram at JustAroundThePointe.