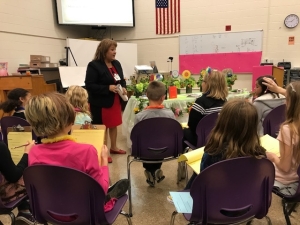 Maria Balotta has been working with students her entire adult life, and after retiring as a school counselor in 2015, she decided to pursue her dream of writing children’s books. Although she had previously published works, this summer, she released her first English/Spanish illustrated children’s book; The Little Box of Truth, La cajita de la verdad.

On Friday, October 20, she led an interactive reading of her new book with students at Sailorway Middle School. On the same day, she hosted a writer’s workshop with a select group of students that were identified by their teachers as having a clear interest in writing.

During the writing workshop, Balotta spoke to the students about things they can do to improve their writing skills. She actively encouraged the students to read as much as they could. “The more you read, the more words you collect in your word bank,” She went on to tell them that having a large bank of words stored in their minds is like having money because anytime they need a word, they can rely on their word bank.

The students shared some of their favorite books, which included popular choices such as Harry Potter, Wonder, and the Seekers. “Read, read, read and read some more and then write, write, write. Write about everything” Balotta enthusiastically exclaimed. She encouraged them to write about everything that evokes strong emotion for them. Stating that the more they write, the better they will get at writing and conveying their thoughts and feelings on paper.

She also spoke with them about how to create an image with words. One tip she provided the students was to show instead of telling. She then demonstrated this by posing a prompt and allowing students to say how they would describe the situation. The students excitedly raised their hands with each question wanting to participate in the workshop fully.

Balotta shared with them that when they get an idea, they need just to get it out. Write it out as fast as they can and worry about revising it afterward. Balotta also advised them to rely on teachers and honest friends to help them through the revision process. She went on to say that a friend that will always tell you everything is great isn’t beneficial. They need a friend that can offer creative criticism and suggestions on how they think it can be improved.

She demonstrated this by showing the students a hard copy of a page from her next book and invited them to point out things that weren’t clear and make suggestions on what they think she could improve. After critiquing one page as a large group, she broke the students up into pairs and gave each pair a page from her next book for them to make notes. Again, they were invited to say what they liked about the page and what they would do differently.

Students Isabella Phillips and Chloe Coon were paired together and given the draft for page eight of her book. They wrote down which parts of the drawings they liked and which parts they thought were unclear. They were able to write directly on the page, so Balotta could look at their notes later and consider their suggestions.

The students were excited to be a part of the writer’s workshop. Joseph Webb shared that his favorite part of the workshop was that Mrs. Balotta gave them a sneak peek at her next book. Jaylee Miller, who shared she wants to write songs when she grows up, stated she was excited that Mrs. Balotta explained how to write a full story. Student Alyssa Woodward simply said she learned something new and it was a fun class.

After the presentation, Balotta shared a bit more about her books and her goals in writing them. She explained that she believes success is not defined by an individual’s I.Q., but rather their emotional intelligence; their ability to be kind, understanding of others, and their ability to get along with many different people. She went on to say that the underlying theme of all her stories is that things like family, race, appearance, and intelligence do not define who you are as a person. She wants students to know that all they need to be is the best version of themselves.

She also shared that the students in this workshop were the first to see the draft of her next book, so they were her first focus group. She thought it was highly valuable to have a focus group of students in the age range the book is targeting to look at it with fresh eyes and see things she may not have noticed.   She has also shared that the illustrator for her next book is a student at Vermilion High School. Although she didn’t want to share the name of the student yet, she said the student is incredibly talented, and she is very excited about the arrangement. On Wednesday, October 25, Balotta was at Vermilion Elementary School for another interactive reading of her current book.