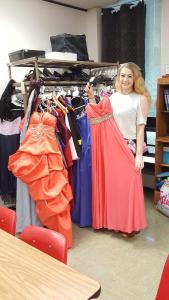 Hannah Stratton, a senior at Vermilion High School, is working to make sure that no student misses out on formal events because they can’t afford a nice outfit. She has led the way accepting donations of dresses for students to borrow for homecoming, winter formal, and prom.

Recent consumer studies show that the average prom dress ranges in price from $100 to $400. Then you add in the price of shoes, jewelry, flowers and hair, and it quickly gets very expensive, which makes it unrealistic for many students.

In addition to collecting dressings for Homecoming, Winter Formal, and Prom, they are also collecting purses, jewelry, dress shoes, and men’s’ clothes. She shared they have also collected several ties, button-up shirts, and dress slacks for the guys. She added that they are still taking donations, and if any community members had formal wear they wanted to donate, it could be dropped off at the high school main office.

She wanted to help make sure that all students have an opportunity to go while not feeling awkward or stigmatized needing to borrow a dress. In order to encourage girls to use the Captain’s Closet and to eliminate any awkwardness, she has encouraged the other students in peer leadership to get their dress from the Captain’s Closet too. She has also made it easy for students to browse the available options during their lunch period by bringing the clothes into the cafeteria.

As Stratton recognizes the need within the school, she also expanded to casual dresses that students can borrow for other events like graduation. She shared that the Captain’s Closet has been well received so far. She has received a lot of donations, and they have already loaned out 25 dresses for homecoming.

Stratton stated that they learn as they go and are getting better organized as they learn what works and what doesn’t. She created a Google Doc to manage the dresses. When a student picks out the dress she wants, the dress and the student are recorded, so they know who has which dress.  After the dance is over, the dresses are returned to the school and dry cleaned, so they can be used again.

She hopes that members of the peer leadership class will keep it going next year after she graduates. She believes it is a real benefit to the school community. She also stated that it has been an absolute group effort. While she has taken a leadership role with it, she credits her peer leadership class for creating the opportunity and helping her make it a reality.