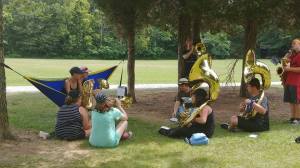 This is a big year for the Vermilion band program with many positive changes giving students more opportunities to be involved and take on leadership roles within the band. New opportunities have also been created for younger students to get involved and encourage them to consider marching band as they get older.

According to director Kimberly Judd, this year’s band program is focused on growing musicianship, as well as a family atmosphere. Judd shared that she wants band members to take pride in each other, the band, and the school. She stated that working together as one group is the most important.

Both Judd and Sailorway band director Brett Dawson shared that this is an exciting year because it is the first year it is fully their program from start to finish. You may recall that Judd was hired last year right before band camp started, so the program and the direction were already in place.

She shared that she has seen incredible leadership so far in the students, which she is very happy with. Dawson added that the numbers of students in band are up in both Sailorway and VHS, and that the band is a very healthy size for the size of the school.

New this year, the band will be featuring field commanders. These are student leaders within the band that take extra training to be able to direct the band on the field. This provides them with a great learning and leadership opportunity while also providing Judd and Dawson the opportunity to really focus on what the students are doing on the field and where they need to work on things during practice. It also provides an opportunity for students interested in a career in music to further explore directing and gain knowledge.

The field commanders will be Trinity Patton and Hannah Cooper. To be chosen for this position, they wrote essays and went through an audition process. Judd explained that this is a great opportunity to put the leadership in the hands of the students. It is another tool that will allow students to take ownership and have pride in what they are accomplishing.

This year the band traveled to Kelly’s Island for their annual summer band camp. Judd explained they wanted to do this to provide time for team building and to eliminate distractions. This provided them with more focused time to practice both in sections and as a large group. Judd shared that she is very happy with the progress they made while at band camp, and she feels really good going into the football season.

The band will perform their first half time show of the season at home on Friday, August 25, when the Vermilion football team takes on Oberlin High School.

Another change this year will include the inclusion of a Future Sailor Night. In the past, the VHS Marching Band has hosted an eighth grade night, which provided the eighth grade band members an opportunity to participate in the band program during a varsity football game. This year, they are expanding that opportunity to include seventh and eighth grade band members, as well as the mini majorette and color guard, and it will be called Future Sailor Night.

The younger students will join the marching band on the field during the half time of a football game to show off their skills and feel the excitement of performing in front of a football crowd. Prior to the future sailor night, all the students will have the opportunity to participate in two rehearsals with the entire band.

The mini majorette and color guard groups are scheduled to be starting the first week of school, and will be open to students in kindergarten through eighth grade. Future Sailor Night is scheduled for Friday, October 6, when the Vermilion football team takes on Port Clinton at home.