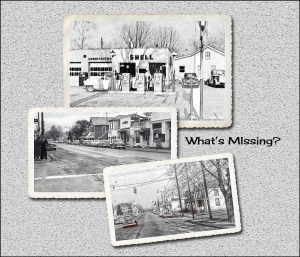 Remember that old Joni Mitchell song: “They paved Paradise and put up a parking lot?” Well, in these particular instances (see the snaps) it wasn’t exactly Paradise, but gosh and gee whiz it was the Vermilion, Ohio that some of us knew when we still had hair – or at least had hair of a different color. No, it wasn’t always real pretty. the Fischer building was a dark brick red, and the stores along Liberty, Division and Main streets were occupied by at least 2 grocery stores, several butcher shops, numerous restaurants, two barbers, at least one dentist and a doctor, 2 drug stores, a bank, 2 hardware stores, 3 saloons, a theatre, a florist, a newspaper and magazine store that also sold bus tickets, several beauty salons, 2 department stores, a shoe store, an appliance store, Ohio Edison, several service stations, a building supply and coal outlet, 2 auto dealerships and at least one gift shop.

To be sure the way the area appears this day (2017) the business section of town was, again, hardly what one might call a “pretty” place. But on the other hand it was extremely functional. In short, persons who made their homes in town really had no need to drive any distance to acquire much of anything needed for the average household. So in a practical sense it really was a kind of paradise: a perfect state. That is because it was very possible for a person living in Vermilion, even those without any form of transportation, save their feet, to get along quite well without having to leave town for anything.

The snaps accompanying the column this week were taken in the mid-1950s. The photograph at the top is a nice picture of what was then late Vermilionite George Robert’s Shell gas station. This station was located on the northwest corner of Liberty and Washington streets. It is now part of the Ritter Public Library’s parking lot. Both the station and the house directly behind it were razed to make way for the lot. A big house that once sat just west of the station also disappeared. It had been moved to Cemetery Road a few years prior to the razing of the station. When the parking lot was installed part of north Washington Street was vacated by the city.

The photo below the station should be very familiar to most Vermilionites: the corner of Liberty and Main streets looking west. By and large it appears much the same today as it did then – with a few exceptions. The White Inn Restaurant that once occupied the space next to what was then George Rathbun’s grocery is gone. So too is the big house that sat between the inn and what is now the Old Prague restaurant. Both were razed and eventually replaced with (what else?) a parking lot.  Readers should also note that there was parking on both sides of Liberty at that time. The open spaces near the corners of Main / Division street on both sides of the highway were reserved for Greyhound and Lorain Transit busses.

The bottom snapshot was taken in the street in front of the aforementioned George Robert’s gas station facing east. The traffic light only worked during months when school was in session. It was there to protect youngsters living on the north end of town when they crossed the busy highway on their way to and from the schools on South and Decatur streets. After the library was built it was moved to Perry Street when the railroad crossing was still open. But when this picture was taken the Ritter Library had not yet been built. The house on the right was a duplex and until very recently still occupied the corner. Next to it was Ralph Sharpnack’s Chevrolet and Oldsmobile dealership. And next to it was Maggie’s Liberty Tavern.

The changes illustrated by these snapshots are actually very subtle. Like the course of a river they took place over a relatively long period of time. Actually, persons who’ve been absent from town for a few years note them most. But for locals everything always seems much the same. We adapt and take little notice of them. At least we do until we see pictures such as these appear. Then do we reminisce and with a sigh and wonder why anyone felt the need to mess with our paradise. But don’t blink. It’s still happening.

Ref: Special Thanks: To Bud and Leslie Ennis and the Roberts family.