Tom Hug of Huggy’s Social House was at the meeting again to address the council regarding his parking issue. Hug stated he wanted to reiterate the need for parking on Park Drive. He went on to say he is doing everything he can, but they are a growing business and need all the parking spots they can get. Since the issue of parking first arose, Hug has made arrangements with Vermilion Power Boats and Romps for additional parking. He urged the council to make what he referred to as a “pro-business” response.

Next to address the council was Jeffry Smith on behalf of Tom Hug. He argued that the former Burley property was a commercial property that was moved to residential, which he stated makes is a private dispute. He firmly urged the city to step away and stay out of it allowing it to remain a private dispute.

Finally, Cindy Andrews representing the Vermilion Lagoons Association addressed the council. When the Burley property went up for sale, the association purchased it and then demolished the building to create a green space. She asserted that parking on Park Drive posed a safety issue. She went on to say that Mr. Hug has been able to arrange additional parking, and if he wanted the Burley property for parking, he could have bought it when it went up for sale.

Following each address, the council moved to the reading of ordinances, which included a third and final reading of Ordinance 2017-22, which if approved would have amended a current ordinance to allow for no parking signs to be put up on Park Drive in the area being disputed between the Vermilion Lagoons Association and Huggy’s Social House. 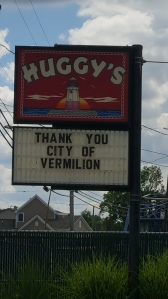 One thought on “Council steps away from parking dispute”