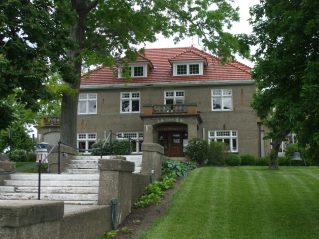 The Wakefield Mansion Restoration Committee met with DS Architecture on Wednesday, March 29, when DSA provided their preliminary assessment of the condition of the property. DSA also wanted to gather information regarding usage of the Main Street Beach area, so community service organizations such as Shore Thing and Main Street Vermilion were invited to give their input.

DSA representatives Douglas Fuller and Paul Romanic explained initial findings, which includes the original red clay roof is still the primary cover. While the roof has significant leakage problems, there is relatively little water damage inside the building. There are three possible solutions for the roof issue, but DSA asserted that whatever is going to be done needs to be done this year.

The plumbing and electrical will need complete replacement. The unusually thick concrete walls provide their own insulation, so additional insulation is not recommended. Additionally, the interior needs to breathe according to DSA. They went on to explain that it is unusual to find the use of concrete on large buildings outside of bid cities of that era. They also added that most of the original hardware on the doors and windows are still usable.

According to Fuller, the mansion is “in amazingly good condition for a historic building of its age.

They also provided an assessment of the addition, which included excavation and waterproofing was needed, all the dry wall and wooden frames needs to be removed, the roof needs to be updated, and a decision needs to be made whether the renovated plan will have separate upstairs and downstairs rooms or one large room with open access to the two levels.

During the meeting, it was also announced by Wakefield Mansion Development Committee Chairman Jon Logue and mayor Eileen Bulan that the old mansion and surrounding city-owned property will be named Harbor View Park, and it will be a signature park of Vermilion’s park properties.