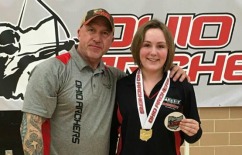 What started as something fun to do on a Saturday has turned into a passion for one young girl. Two years ago, Molly Wade and her father went to Bad Boy Bait and Tackle on a Saturday to try archery as something different to do together. She shared that neither of them had ever done this before and it sounded fun. Wade quickly realized she was actually quite good at it, so they kept going. Soon, she had her own bow and was going several days a week.

Last year, at the age of 11, she competed in the 10- to 12-year-ol d age group at the Ohio Archery Association state competition and won all seven events. Wade stated that it wasn’t really competitive for her.

In light of her accomplishment, this year she competed in the 15- to 17-year-old group and has come in first in two out of three events and second in the third event. In doing so, she beat the state record scoring a 290 out of 300 possible points. She explained that during the event, all the competitors shoot at the same time. They go through 12 rounds and shoot five arrows in each round for a total of 60 arrows. Depending on how well they shoot, they can earn up to five points per arrow. She has four more state events coming up that she is eager to participate in.

When asked how she feels about being a state champion, she shared, “it’s always a surprise…it makes you feel really good knowing you’re first in the state.” Wade currently has two sponsors; Wickstick Stabalizers and Bad Boy Bait and Tackle, but she hopes to continue achieving and getting larger sponsors because this will allow her to travel and go to more competitions. She shared that while she isn’t really sure what she wants to do as an adult yet, being a professional archer is something she thinks about.

She went on to say that competing in archery has allowed her to make a lot of great friends from all over the state and beyond. She has also had the opportunity to meet many amazing people including Levy Morgan, who she described as being the best archer in the world.

She stated that the success and the expectations that come along with it can be a little overwhelming. However, she feels she has a lot of support. She said her family, her friends, and her teachers have all been very supportive.  She was happy to share that her younger sister, who is eight, has also started shooting.